I recently had the great pleasure of cooking up some Gleason steaks from Crowd Cow's first event sous vide style by none other than Scott Heimendinger, an innovator working to bring sous vide to the masses, and co-founder of Sansaire, a leading sous vide device maker.

Scott previously worked at Modernist Cuisine's culinary lab (the group led by Microsoft's former CTO that created an epic, 6-volume cook booked named "the most important cookbook of the first ten years of the 21st century" at the Paris Cookbook Fair.)

Scott's sous vide adventure began back in 2010, when he published instructions for a DIY sous vide machine.

What Is Sous Vide (and Why You Should Care)

Simply put, sous vide is way of cooking meat that produces some of the juiciest, most tender and delicious meat you've ever tasted.

Sous vide works cooking with very precise temperature control. You by submerge vacuum-sealed food in a water batch bath and cooking at a precise temperature for a relatively long period of time and allow the food to cook until it is perfectly done from edge to edge. Because the sous vide machine maintains the temperature of the bath, your food can't overcook, even if you leave it in the water bath all day long.

Crowd Cow makes sous vide a no-brainer, since all of our steaks come individually vacuum-sealed in sous vide-ready packages. Just set the temperature, drop the frozen steaks in the bath and cook.

How to Sous Vide Frozen Steaks

The simplicity and elegance of sous vide comes from the fact that doneness is a function of temperature, not time. This makes cooking the perfect steak remarkably simple.

For example, to cook a steak to "medium rare," you would simply set your sous vide machine to 54 degrees celsius and drop your vacuum-sealed, frozen steaks in the water bath. We recommend 90 minutes for a ½” thick steak cooked from frozen. or more (enough time to thaw and cook the frozen steak.) For a 1-inch thick steak, we recommend a 3 hour cook time from frozen to ensure that your steak is fully thawed and cooked. (If you’ve thawed ahead of time, the ½” steak will cook in 30 mins, and the 1” steak will cook in an hour.)

Somewhat paradoxically, no matter how long you leave the steaks in (even 5 hours or more), the precise temperature control of the sous vide means they'll still only cook to medium rare. A perfect medium rare.

For more information, check out How to Cook the Steak of Your Dreams.

Which Sous Vide Machine Should You Get?

Given Scott's background with Modernist Cuisine and his 5+ years of work bringing sous vide to the masses, coupled with his thoughtfulness and knowledge on Sous Vide cooking, it's hard to imagine a better choice than the product from the company he co-founded, Sansaire.

I'm not the only one that feels this way however. Serious Eats reviewed three consumer sous vide units and found Sansaire's to be the fastest at heating the water to it's precise target temperature. They also found that Sansaire supported the widest range of water fill levels (making it more convenient to use) and praised it's user interface, quiet operation and ease of clean-up.

Sansaire got its start as the most-funded food project in Kickstarter history, but these days you can find it at any Sur La Table or purchase it online through their website. 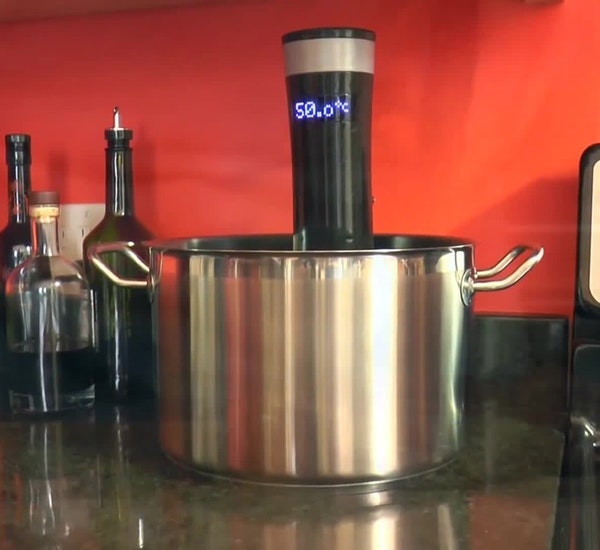 Despite roasting a whole cow in Japan on my 20th birthday, working on a farm in Hokkaido and being…

How to Cook Beef

Here is a quick run-down of recipes and tips so you can fully enjoy your beef. Pro Tips Pro…