Kris and Tony Wolfe are the two brothers behind Wolfe Brothers Farms, a grass-fed, grain-finished cattle farm on the border of Pennsylvania and New York. Their pasture-based farming practice is built on a core philosophy:

We simply say, 'Do unto others as you’d have them do to you.' It’s exactly the same with dirt and cows. We are blessed as we nurture and care for the land and animals that we are responsible for here on this Earth." - Kris Wolfe 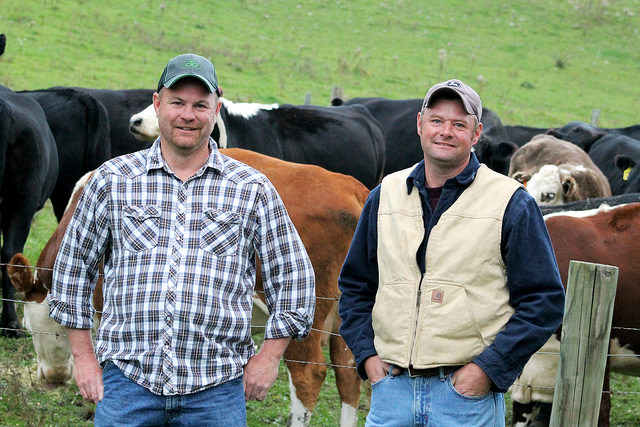 The farming tradition goes back seven generations in the Wolfe family, but Kris and Tony grew up with parents who took off-the-farm jobs, while the kids learned farming at their grandpa's knee. 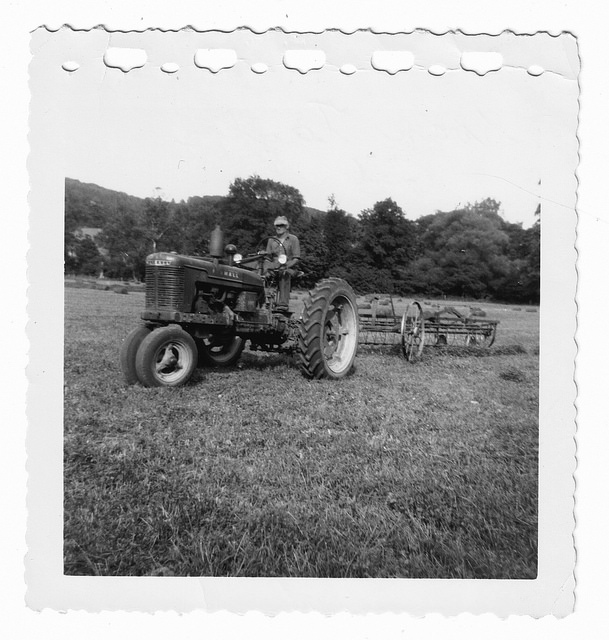 “The 70s and 80s,” Kris said, “were a really hard time for many farm families in rural America. Many of those with deep farm heritage had to find work off the farm to make ends meet.”

Their dad worked as a telephone repairman, and their mom was a secretary for the local school district. Even though he only had a high-school diploma, Kris and Tony’s dad eventually decided to start his own telecommunications company, turning himself into a business expert while his sons, amazed, watched and learned. They each eventually joined the company, but a small part of them still longed to farm. Tony, for his part, nursed the passion by fixing up old tractors on the side. Kris dreamed of owning and tilling his own land. 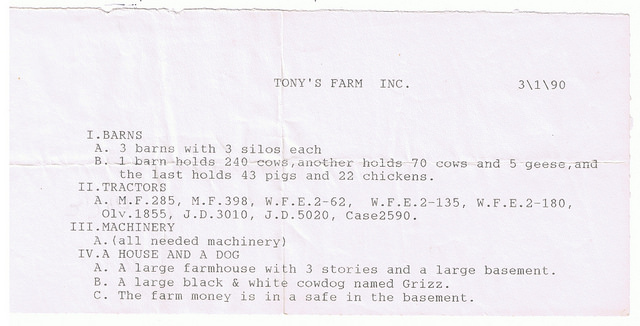 Tony wrote this pipe-dream farm plan in 1990. He had no idea most of it would come true. (He does not, however, keep his money in the basement.)

9/11 dealt a serious blow to the family business, and Kris and Tony made the decision to take self-imposed layoff so other employees with families could keep their jobs. They were at a crossroads.

Their farming dream was a massive financial risk, but it was time to try.

Making the most of a difficult time, Kris and Tony put their heads together and decided they’d never get a more perfect opportunity to start fresh. Their farming dream was a massive financial risk, but it was time to try.

In 2002, Tony bought a combine and a tractor-trailer, never having driven either before. The two brothers then agreed to help a retiring neighbor take care of his cornfields, and everything spiraled from there. While they rejoined their parents’ business when it got back off the ground, they kept farming mornings and nights, planting and harvesting crops. In 2008, they bought their first dairy cows, and 2013 brought green beans, wheat, and the switch to full-time farming of beef cows. 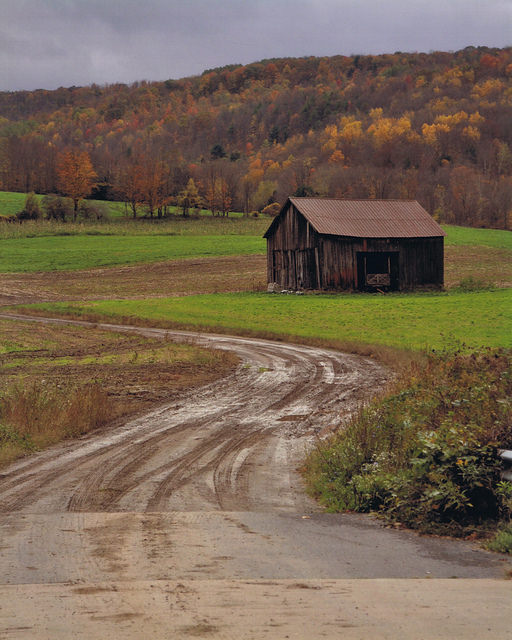 Today, Kris, Tony, their families, and three other trusted families in the neighborhood all work together on Wolfe Brothers Farms to take care of the momma cows, raise no-till crops, move cattle from pasture to pasture, and keep up with the day-to-day bustle of a working farm.

When you buy Wolfe Brothers Farms beef, you're not supporting one small farming family, but five. 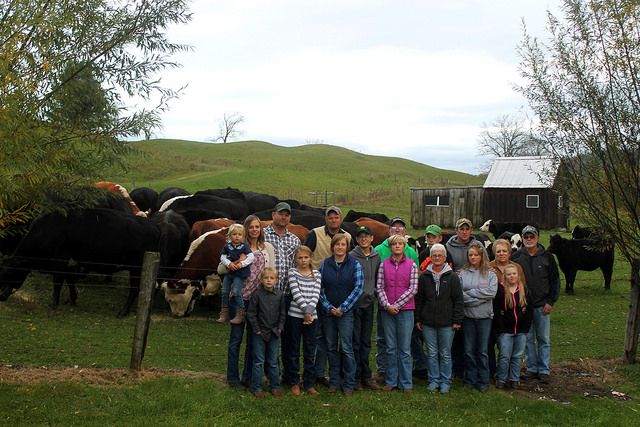 The Wolfes' Black Angus herd roams up in the hills behind the wooden barn where Kris and Tony used to ride the yellow tractor with their grandpa when they were little. The growing season for crops in Northern Pennsylvania is short, but the brothers extend it by growing a variety of unusual forages and non-traditional grains. 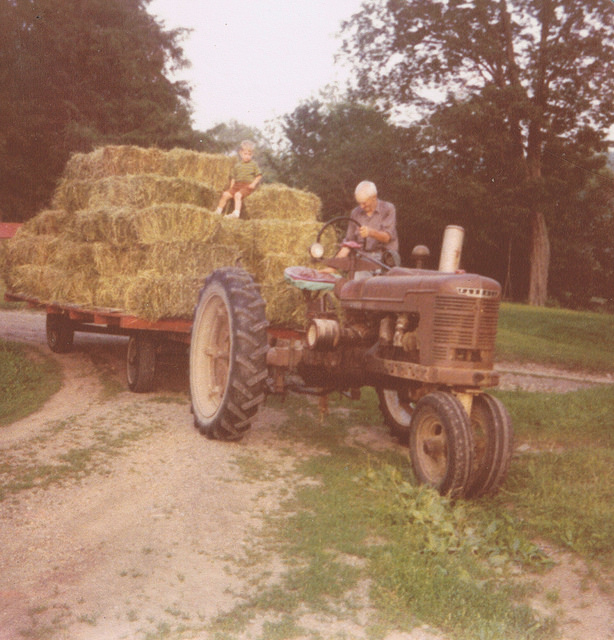 The cows thrive on the open pastures of hay, sorghum, and radishes. They’re finished on a healthy mix of grasses and grains, and produce delicious meat as a result. Kris and Tony believe in the idea of a blended feed, hand-mixing the cattle’s lunch and dinner every day to make sure each animal always gets a “complete bite” full of nutrients. Meals on Wolfe Brothers Farms include a mix of hay, oat silage, corn silage, sunflower, millet, and milo.

At Wolfe Brothers Farms, the focus is on preserving traditional, heritage grains.

The cows are never given antibiotics, growth hormones, implants, steroids, or animal products in their feed, because animal welfare, Kris insisted, “shouldn’t be a buzzword. It should be a way of life.” 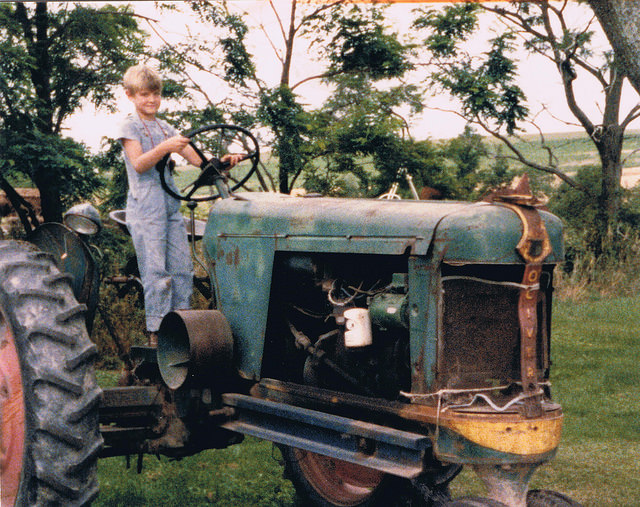 “Our beef has a really unique, wonderful taste," Kris explained. "With some grain and lots of forages, including ancient plants like millet, you get marbling and deep, complex flavor that’s second to none.”

With dedication to no-till farming, cover cropping, and using recycled cow manure as fertilizer, Kris and Tony are ensuring their land and soil will be sustained for generations to come.

Top Japanese Chef Reveals How to Cook A5 Kobe Beef

Recently I had the privilege of spending time with one of Japan's top Kobe Beef chefs, Mitsuo Yamamoto of…

Tips for Preparing the Perfect Turkey

We talked to Chef Daniel Orr, chef-owner of FARMbloomington Restaurant [https://www.farm-bloomington.com/] in Bloomington, Indiana and co-host…